In October 2014 Transport for London completed a major, £30m project to transform the network of highways and gyratory roads that cut through Tottenham Hale into a calmer, less hostile movement network which create better places for people to walk, dwell, orientate themselves and move from one travel mode to another.

A key component of this project was the formation of a consolidated bus interchange, drawing together a plethora of bus stops and stands into a single location with safe, clear walking routes to the major rail interchange at Tottenham Hale. The main architectural challenge was to integrate this substantial piece of bus infrastructure in a characterful, elegant way that enhances, rather than distracts from the quality of public open space.

In order to give the bus station a clear sense of place in an area dominated by non-descript, shed retail outlets and heavily trafficked roads, Landolt + Brown architects and Mott MacDonald structural engineers developed proposals for a series of distinctive steel canopies which span the main waiting areas of the bus station. The brief for these structures, beyond providing shelter from the worst of the weather, was to minimise their physical impact on the (necessarily) narrow island waiting areas at street level, to ensure that they were of sufficient height to allow the buses to pass beneath them, with sufficient clearance to allow the buses to be jack-lifted in the event of breakdown and to create canopies that would allow daylight to penetrate, but would not be reliant on sheet materials that could collapse in the event of a vehicle fire or explosion.

The canopy design is based on a series of steel ‘trees’, each comprising a central, tapering trunk supporting 6 cantilevered branches. At canopy level, a triangulated perimeter beam runs between the tips of each branch to form the outer connection point for a series of tensile cables which radiate from the centre of each canopy to support a single foil ETFE roof. The use of these central columns and cantilevered beams minimised the number of ground-level supports, freeing-up the ground plane beneath for the most efficient movement of buses and pedestrians.

The overall impact of these intersecting, blade-like forms, their radiating cables and carefully designed and skilfully fabricated connections, is to create geometries which are complex, intriguing, elegant and unique. 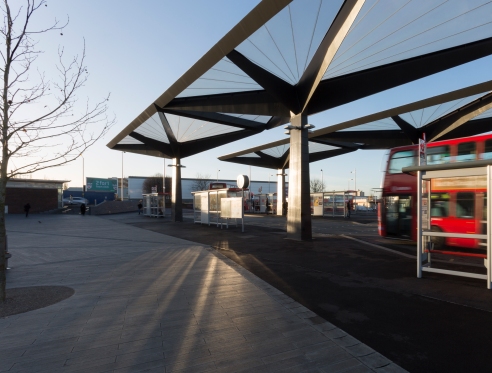 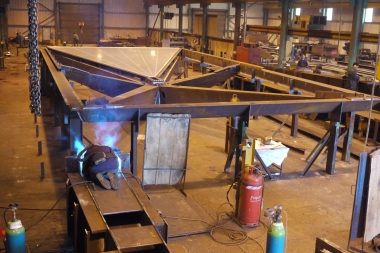